Danish Porcelain House
Back
You are here:Home pageAbout usThe story of DPH
The story of DPH
Do you have questions?
Write us on [email protected]
About us
Contact us Gallery Opening hour The People behind DPH Copyright Bank information E-marked
Here you can read the origin story of DPH Trading. Find out why we are called DPH Trading, how the owner and founder Joergen Risager came up with the idea to sell plates, as well as how our company came to sell so many other amazing quality items.

Danish Plate Trading, today known as DPH Trading, was founded February 1st, 1972 by the current owener Joergen Risager. The company was based on Joergen Risager's idea of making trading with the Christmas plates his career.

Back then, delivery times were very long, you had to buy them in a hardware store, and you were only allowed to buy one. Only if you had a very good reason, you could be permitted to buy more than one (could be something like - I could not bear, if my old grandmother did not get the newest addition to her collection as well.) 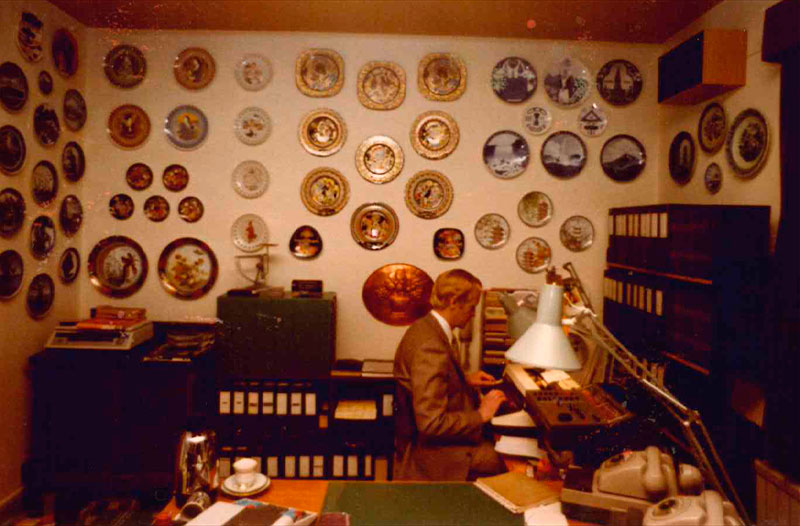 After many hardships Joergen Risager succeeded in procuring 15 pieces of the 1970 Bing & Groendahl Christmas plates as well as 15 pieces of the 1970-plate from The Royal Porcelain Factory. In 1970 the plates were sold at a retail price of DKK 30,65 a piece (approximately USD 5.-).

After scrutinizing the household money, he decided, that his family could do without the money spent on the plates and kept the plates to himself. By December 1971 Joergen put the plates up for sale.

All the plates were sold to the first person who wanted to buy, at the price of DKK 45.- a piece. Thus these 30 plates became the foundation of the company. 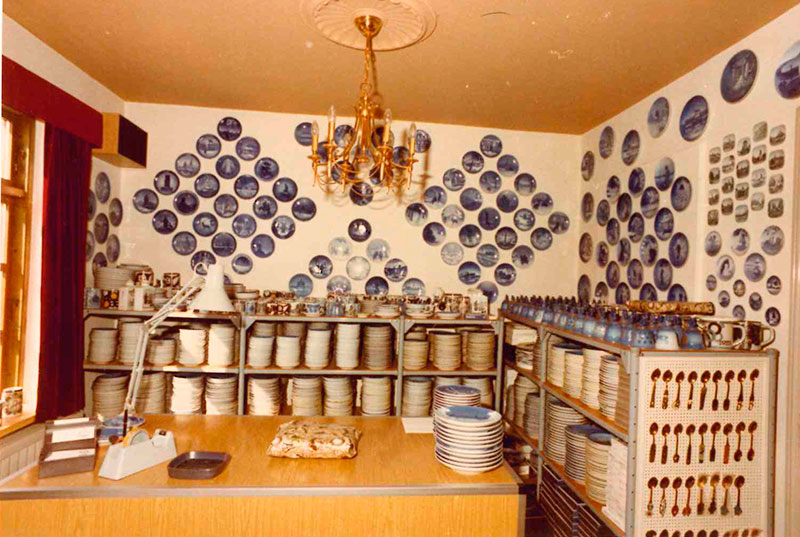 Instead of returning to his job after New Years 1972, he was granted leave from his job to try out his idea. The company was founded on this slender foundation.

The company had a rough take-off. The banks had absolutely no confidence in Joergen Risager´s idea. He could not get a loan or an overdraft facility, so trading-money were scarce. Luckily the plate-trade thrived in Bolbro, Denmark, where the company was situated during the first ten years.

Danes as well as Americans were more than willing to buy. During those years "Dansk Platte Handel" exclusively dealt in plates and a few figurines.

However the selection grew quickly to hold a extensive selection of Danish as well as foreign plates and figurines plus supplements for old dinner and coffee sets.

The property at Loekkegravene 49, Odense N., Denmark, where the company is still housed today, was acquired in 1982. Shortly after Joergen Risager had taken possession of the new building, the market unfortunately took a descending turn, in Denmark as well as in The United States.

The situation was difficult, and DPH had to find new sources of income to supplement the plate-trade and to survive the failing sales. The supplement became antique, semi-antique and new Chinese and Japanese vases and jars. 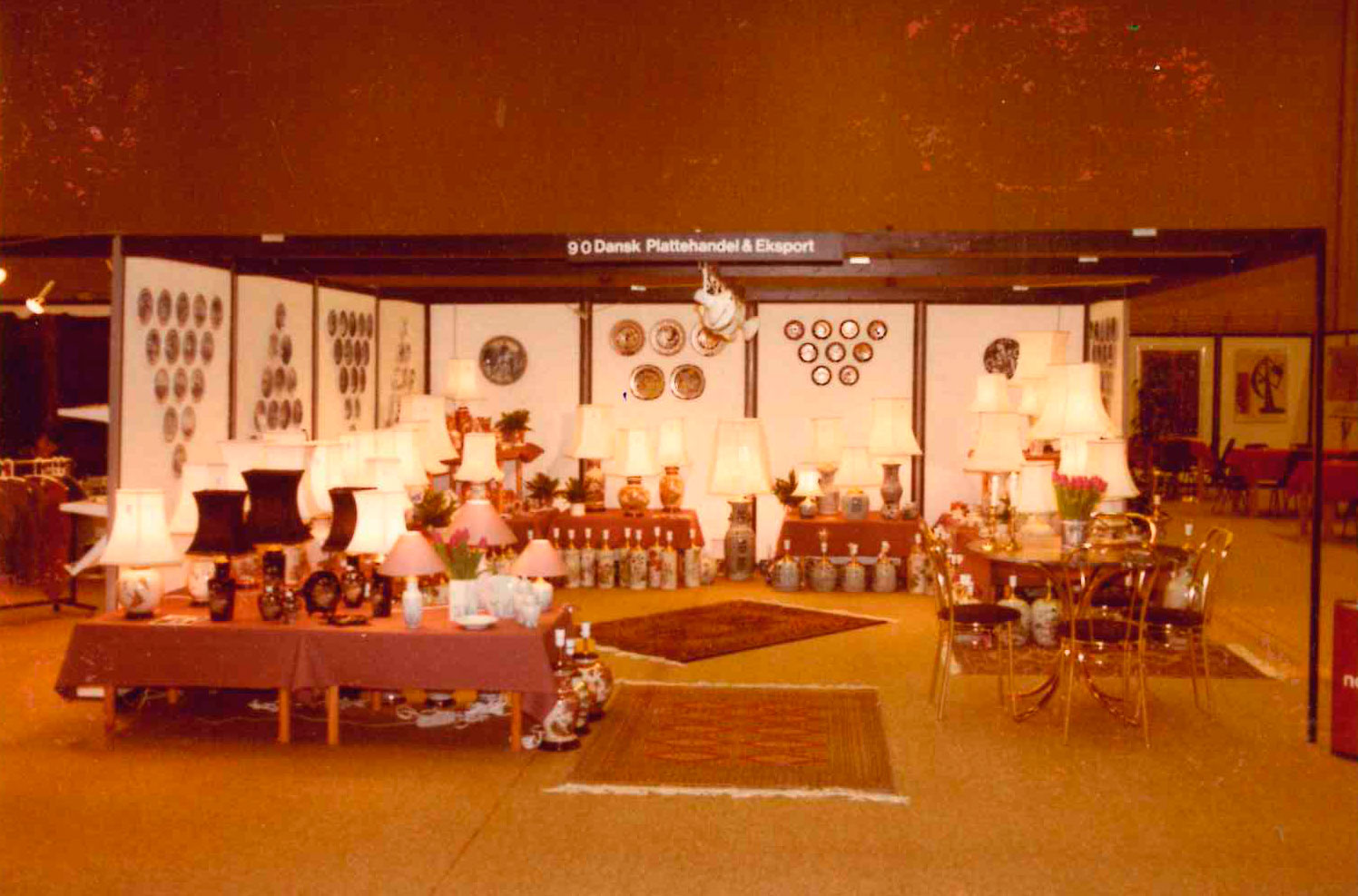 From vases to lamps 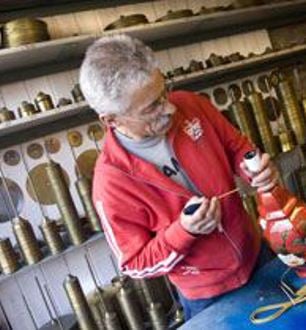 Most of our customers preferred lamps to vases or jars. Therefor the lamp-assembling workshop was established.

At the same time, the company name was changed to DPH Trading, as the name "Danish Plate Trading" did not cover the sale of lamps, vases and jars.

DPH benefited from the connections to Japan when receiving a visit from Japanese suppliers. They instantly fell in love with the Danish Christmas plates and this was the kick off of a large export of Christmas plates to Japan. The export started in 1989 and boomed by 1993, where the Japanese really got their eyes up for Danish collectibles.

The art of limitation has never been Joergen Risager's strong suit. Throughout the years the company has gone through both expansions and developments. Jorgens wife, Inger Risager, joined the company in 1984, and stared as a sales representative for DPH.

Soon after in 1986 also Jorgens daughter Lone Risager Therkelsen started to work full time in the company as well. Lone was originally only supposed to help out in a busy period, but her interest for trading and beautiful things made her join the company permanently. 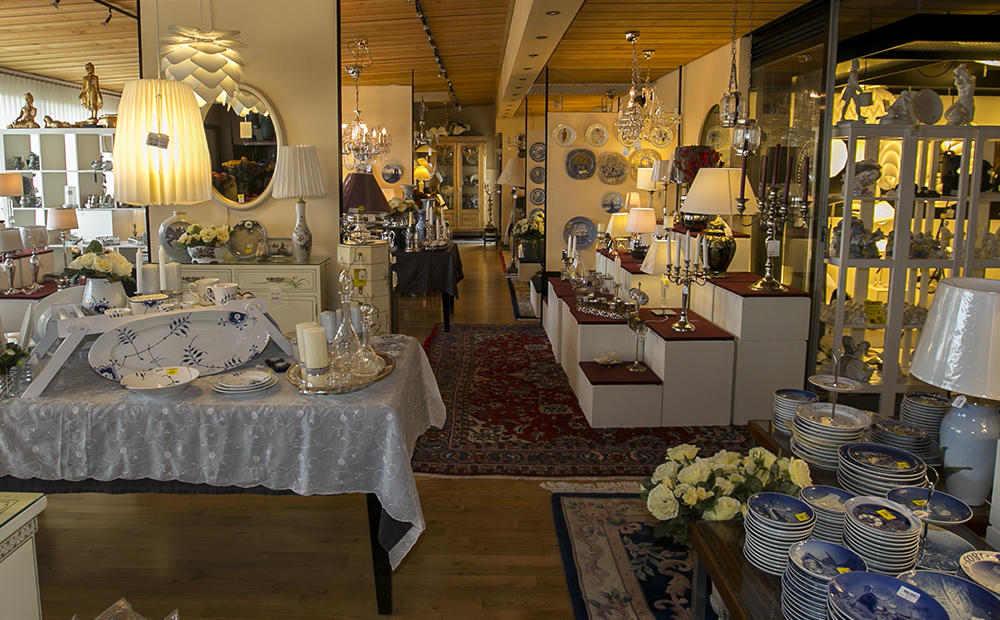 DPH Trading was online at the end of the 90s

As to IT, DPH Trading has always been in front, as Joergen Risager is absolutely fascinated by the amazing options and possibilities of computers.

Also, in our contact with the customers the computer, and the internet especially, is a well-qualified and quick media. With a wide range of collectors worldwide as our customers, business would be almost impossible without the internet.

As a way to handle the thousands of products in our assortment, DPH Trading launched a web-site and shop. For many years, this investment was not profitable, because the cost of development did not match up with the turnover from the web-shop. The web-shop has been improved and changed multiple times since.

We are still adjusting, correcting and adding further functions to our site, working intensely to give you as a customer the best possible service. The most recent improvement was to change to a whole new site, which launched in 2022. 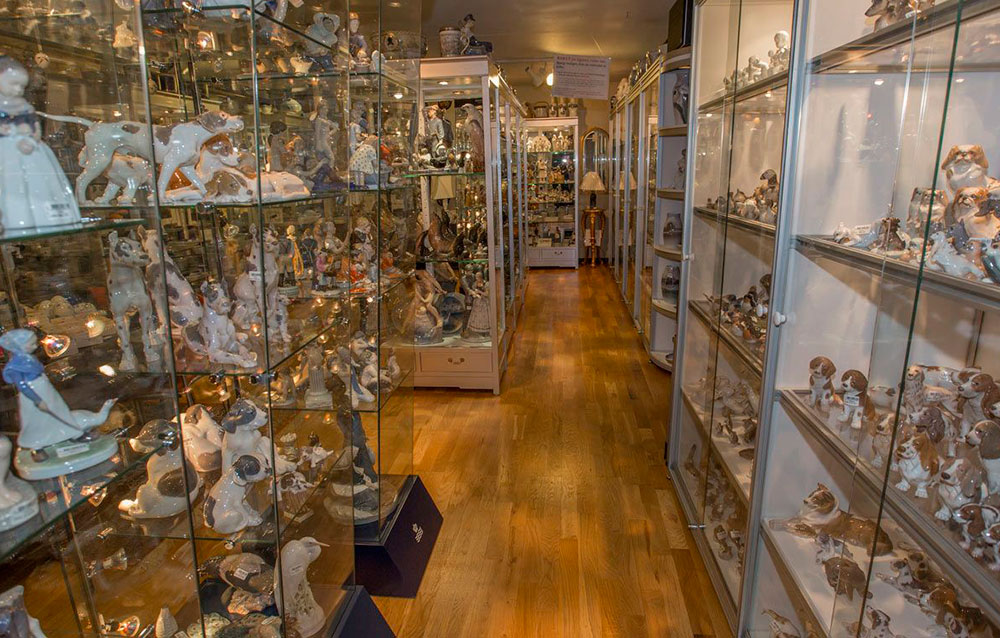 In the beginning of 2017 we were contacted by a sweet lady from Sweden. A big collectibles seller closed down and we went there and found a giant storage filled with cardboard boxes.

At first, we said no. We simply didn't have room for the thousands of goods, but once the seller started insisting on us bidding, we ended up buying it anyway.

We bought 6 big containers to transport the goods from Sweden to Denmark. We were very excited to unpack the thousands of boxes with porcelain and glass, etc.

Down below you can see some pictures from the arrival and the beginning of the unpacking process: 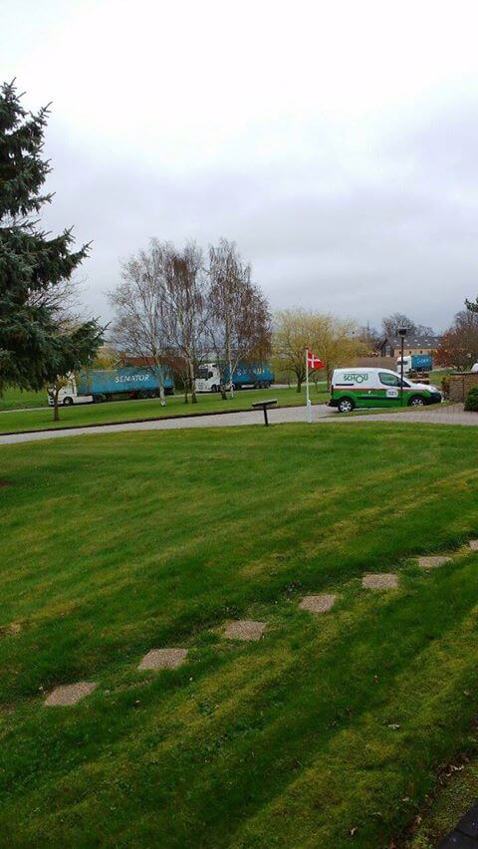 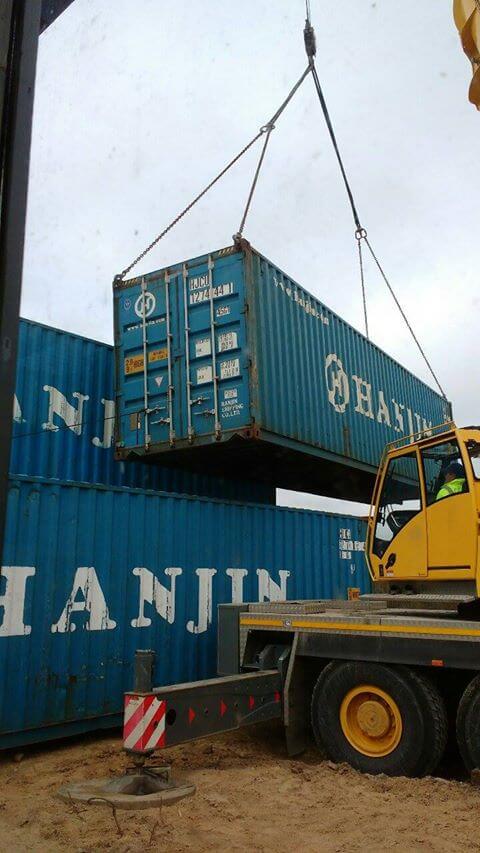 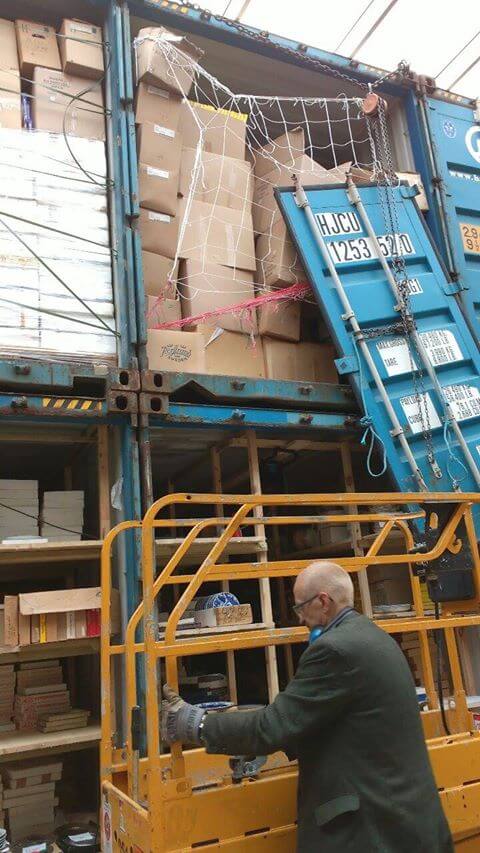 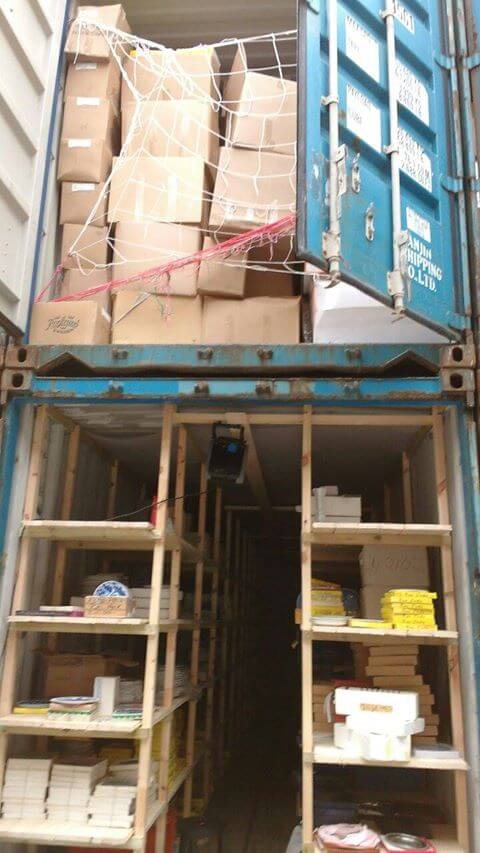 All the goods from Sweden was unpacked and sorted. It took us almost 6 month to manage the goods, here amongst some from the danish brands;

as well as foreign brands;

Sustainability and the coronavirus

When Denmark closed down on March 11, 2020, do to the rising number of people getting sick with Covid-19, DPH Trading also closed our physical store in Odense. In the weeks following, we didn't sell anything, but luckily our customers started buying online and our grand number of both new and old collectibles, decorations, trinkets, etc. saved us. DPH Trading's turnover rose remarkably, so that our online sales surpassed the sales from our physical store in Odense.

Also, do to the fact that a lot of people have realized that buying old and vintage is a good thing, we have seen an increased interest for buying beautiful, old (retro) things. As a more sustainable way of thinking has made it's way into our lives, a bigger demand for purchasing and incorporating old and antiques into the modern interior design has acquired, creating a charming mix with a lot of personality.