More payment options
Newsletter
Sign up for our electronic newsletter and be the first to hear about our many great sales.
Sign up
You are here:  / Home page / Brands / Hjorth Stoneware

Learn more about The Hjort Earthenware below.

Number of items:   19
Items per page:
Show as:
▼
Prices shown in:
Price is based on delivery in:
EU
Other countries

The History of Hjorth's Factory

Hjorth's Factory was founded in 1859 in Ronne on Bornholm (Danish island in the Baltic Sea). In those days the name was L. Hjorths Terracotta Factory.

Lauritz Hjorth (LH) was an educated potter from The Faience factory of Edvard Chr. Sonne in Roenne. After serving his apprenticeship, he travelled to France, Germany and The Czech Republic acquiring new skills at the same time as enjoying and absorbing art and culture. The journey lasted for three years after which he startet the factory in his parents house in Ronne.

In the beginning the production consisted of flowerpots, matchholders and watercoolers. Business was so good, that the factory already in 1862 could move to the present location in Krystalgade. By now production consisted entirely of decorative items, in a time when such factories usually only produced kitchen utensils for kitchen-use. 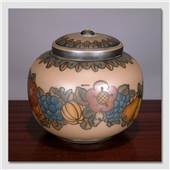 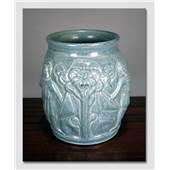 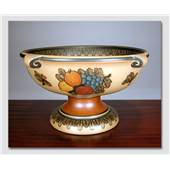 By 1865 Hjorth's employed 10 people, among those the later famous poet Holger Drachmann. Before long the factory had to expand into the nabouring building. It was a great business copying ancient Greek vases and Danish antiquities.

Black terracotta (coal was fired in the ovens simultaneously with the items) was made from 1880. The factory had great success internationally, and already by 1880 Hjorth's articles were sold in the big department stores of Paris, London and Berlin, and as far away as in Australia, New York and Sct. Thomas. The factory also participated in the big World Exhibitions in Altona 1869, London 1870 and 1874 as well as New Orleans 1885.

When turism made its entry around the turn of the century Hjorth produced souvenirs such as little plates, ashtrays and Bornholm runic stones etc. The children of Lauritz Hjorth took over the factory following the death of their father in 1912. Both sons were educated at the factory and had afterwards acquired new skills abroad. All of them had worked in the factory prior to LH's death. Thora was in charge of the painting workshop, while her brothers did the throwing and turning.

Hans Hjorth fired his first stoneware in 1902. The stoneware was sold from his fathers shop and exhibited successfully in Copenhagen. At the World Exhibition in Brussels in 1910, his stoneware received the gold medal. Sales were great  - both for export as well as in Denmark. Stoneware series in greyish brown were produced from 1913.

Export stopped during World War I. Hjorth's products were mainly sold in Denmark. Batch-produced stoneware was the trade mark following the war.

The famous pharmacy pitchers in stoneware were produced at Hjorth from 1927. They came with lids in various sizes. The production were initiated after orders from Esbjerg Kroneapotek. The production of Pharmacy pitchers stopped during World War II, since the factory had problems getting hold of the raw material as well as wood for firing the pitchers (stoneware is fired at 1300 degrees). Instead they startet the production of white-glazed faience, fired at considerably lower temperatures. They had a considerable production of faience until 1960. It was a wide selection of many item numbers from tea sets over pitchers to bowls and dishes - often with narrow, close set grooves. This style was designed by Erik Hjorth (Peter Hjorth's son). All primarly sold from the factory shop.

From 1930 various artists worked for the factory. Fourth generation Hjorths - Ulla and Marie Hjorth took over the factory in 1982 after the father Erik Hjorth. Both sisters work with individually characterized ceramics as well as tableware. The factory closed from 1993 to 1995, but was re-opened in 1995 as a working museum. Here it is possible to see production techniques and articles dating back to 1859, just as you can see the sisters working and buy ceramic items in the museum shop.