More payment options
Newsletter
Sign up for our electronic newsletter and be the first to hear about our many great sales.
Sign up
You are here:  / Home page / Brands / Wallendorf 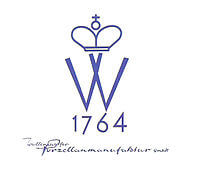 Below you will find a list of the Wallendorf items we have for sale.

You can also read the history of Wallendorf below the list.

Number of items:   13
Items per page:
Show as:
▼
Prices shown in:
Price is based on delivery in:
EU
Other countries

The item is now added to your Shopping Basket:

Go directly to the shopping basket

Wallendorf is one of the Thuringian porcelain producers. The factory is situated in Lichte, where it has been since its founding in 1764.

Wallendorf was originally founded by Johan Wolfgang Hammann. He originally sought concession for the production of porcelain at the court of Schwarzburg-Rudolfstadt, which ruled over half of the Lichte valley, but he was reject, because a concession had allready been given to Georg Heinrich Machelei, who founded Aelteste Volkstedter Porzellanmanufaktur. This is the oldest still functioning porcelain factory in Thuringia.

This did not stop Hammann, however. On the other side of the river that runs through the Lichte valley the court of Sachsen-Coburg-Saalfeld ruled. Here he again sought concession and got it in 1764. He was now ready to begin production. He established Wallendorf with his son Ferdinand Friedrich Hammann and the glass painter Gottfried Greiner and his cousin Gotthelf Greiner.

The two factories in Lichte are among the oldest porcelain factories in Europe. The Wallendorf porcelain was originally produced from Thuringian kaolin, which were in the region. It had impurities, however, and thus the porcelain did not become clear and white. Therefore it was replaced with kaolin from Bohemia.

The factory was on the hands of the Hammann family untill 1833, when it was taken over by Hutschenreuther. Wallendorf changed hands many times, but has produced in the same location since its founding except for the period 1915-1919, when production was halted due to the Great War.

After the Second World War Wallendorf was situated on the Eastern side of the border, which meant that the factory in 1953 was nationalised. It returned to private ownership again in 1990 after the fall of the Berlin Wall. Afterwards Wallendorf has been on many different hands, but the produktion continues in the same locale.

After the reunification and new investments in the production and relaunches of old services the market position of Wallendorf has improved.