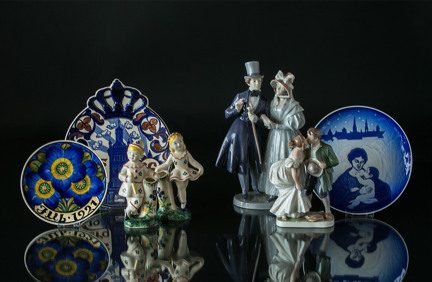 Both faience and porcelain is glazed stoneware. This means that you first burn the shaped ceramic mass itself and afterwards dip it in glazing and burn it again to make the glazing settle. Both are often painted before glazing to protect the paint under the glazing. Porcelain, however, is also often painted above the glazing.

Faience and porcelain differ from normal stoneware by being burned twice and being water-repellent, while basic stoneware absorb some water.

There are a number of physical characteristics that you can use to differentiate between faience and porcelain. When porcelain is struck, it gives of a metallic bell-like sound, while faience gives off a dull sound that can sound a bit like hard plastic. The reason for this is that porcelain at its higher burning temperature and due to its material composition is more tightly set together. This also means that porcelain and faience feels different, when you hold it. 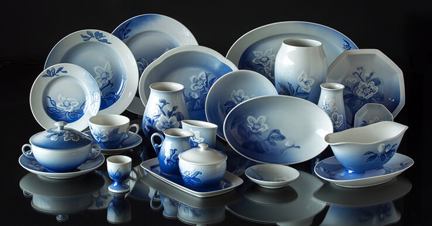 Due to the difference in burning techniques of respectively faience and porcelain there has historically been great difference in the costs of producing the two. Faience have been the cheapest to produce due to the lower burning temperature that needed to be achieved. Thus faience has often been used to make objects for daily use, while porcelain was for occasional use.

Porcelain is highly acid and base proof, highly electrically insolating and pressure proof, but not shockproof. Porcelain has often been used for insolating electrical systems.

The history of porcelain and faience

Porcelain and faience have very different development histories. The story of porcelain is the most commonly known. It was first created in China around the 7th century and was only produced in in Eastern Asia up until the 17th century. During the Ming dynasty (1368-1644) porcelain was an important export commodity. This ended when the porduction medthod was duplicated in Saxony in Germany, afterwhich the European porcelain industry arose. Porcelain has its name from the Italian word porcellana, which is the Cowry shell, due to the similarities of porcelain with these shells. 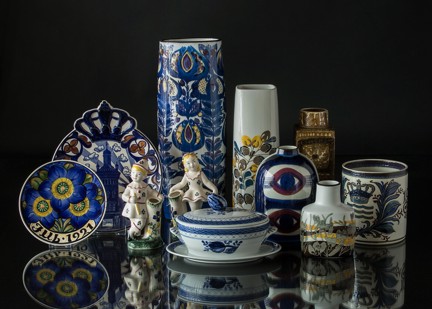 Faience has a more complicated history than porcelain. Faience is not a word with a completely clear meaning as there are two different groups of stoneware that the name is used for.

Classic faience was developed as far back as Assyria, Babylonia and Egypt and later spread throughout the Persian empire. It came to Europe through Greece and Italy. This early faience was just basic glazed stoneware that became waterproof due to the glaze. Different types of glaze was developed throughout history, but the basis of the name Faience comes from the production of faience in the Italian city of Faenza, which let to the name Faience.

Today the word faience is most commonly associated with the faience developed in England in 1759 by Josiah Wedgwood and afterwards spread across Europe and became what is most commonly known as Faience today. The Production of this faience is very much like that of porcelain with a whiteglowing mass, which is cooled and painted and then glazed. It differs from porcelain by a lower burning temperature and the material is not bound as tightly as in the porcelain.

A notable Danish producer of faience is the factory Aluminia.