More payment options
Newsletter
Sign up for our electronic newsletter and be the first to hear about our many great sales.
Sign up
You are here:  / Home page / Brands / Hackefors

Below you will find a complete list of all the items from Hackefors in our selection.

Read the story of Swedish Hackefors below.

Hackefors was founded in Linköping, Sweden, in 1929 by the business man John O. Nilson in collaboration with Erik Reinhold Jyberg, who was foreman at Karlskrona porcelain factory. The collaboration began with an add in the Swedish newspaper Svenska Dagbladet by Nilson, where he sought an organizer for starting up a factory of any type. Jyberg, who had also worked at Rorstrand, wanted to start a porcelain factory and contacted Nilson.

In August 1929 the factory was ready in the town of Hackefors outside Linköping. Jyberg brought a number of workers and porcelain painters with him from Karlskrona. Part of the concept in the business model of Hackefors was that in stead of producing the costly porcelain in house, they imported the porcelain and then painted and glazed it.

New porcelain painters at the factory had a training period of six weeks, where they had to work without pay before they were deemed good enough to be part of the actual production.

From 1934 the factory had reached a point, where it could finance the production of its own porcelain. This production continued for 23 years untill 1957, where they started to import the porcelain again.

In the same year 1957 the heirs of Nilson sold the factory and the number of employees fell to 30, which was about the number that had been, when the factory was established.

In the 70's and 80's Hackefors produced Christmas plates, mother's day plates and Christmas bells. Furthermore the factory also had a production of egg cups, king plates and king mugs for the trader in collectibles Tonkin AB.

The factory changed hands again in 1972 and in 1984 it was like many other Swedish porcelain factories like Gustavsberg and Rorstrand bought by Finnish Wärtsilä. Hackefors was then dismantled as a company on its own and became part of Rorstrand. The factory in Linköping was closed and the production moved to the Rorstrand factory in Lidköping.

In 2007 the Hackefors brand was bought by the newly established porcelain factory Lidköping AB, who continues the production of Hackefors porcelain to this day.

You can read more about Hackefors on their homepage (in Swedish). 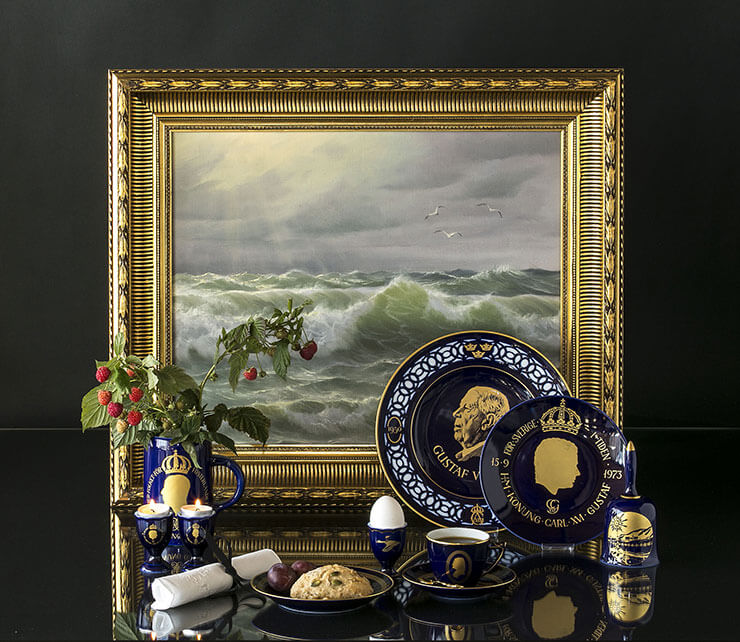