More payment options
Newsletter
Sign up for our electronic newsletter and be the first to hear about our many great sales.
Sign up
You are here:  Frontpage / DPH Trading - Danish Porcelain House - Collectibles, Plates, Figurines, Vases, Bowls, etc. / Do you need help? / Guides / Tips and Ideas for your home decor / Design your own centerpiece

Design your own centerpiece

Revive the flat plate - Use plates as centrepieces

Bring the old, blue-glazed Christmas and Mother's Day plates back to life! Use them as a centerpiece or étagère, and serve everything from sushi and tapas to homemade cookies and fruit - simple and elegant! 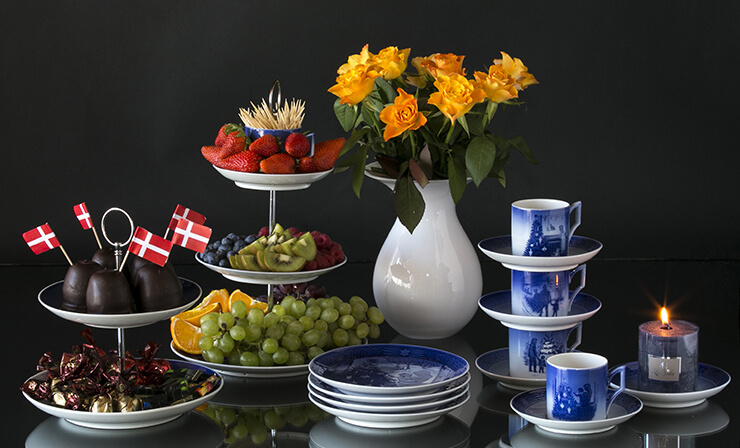 The old blue-glazed vintage plates in porcelain from Royal Copenhagen and Bing & Grondahl were once immensely popular and valuable. Several collectors saw their Christmas plates, Mother's day plates, anniversary plates, etc. as a solid investment and retirement savings. Unfortunately, most plates are no longer as valuable as in the past. 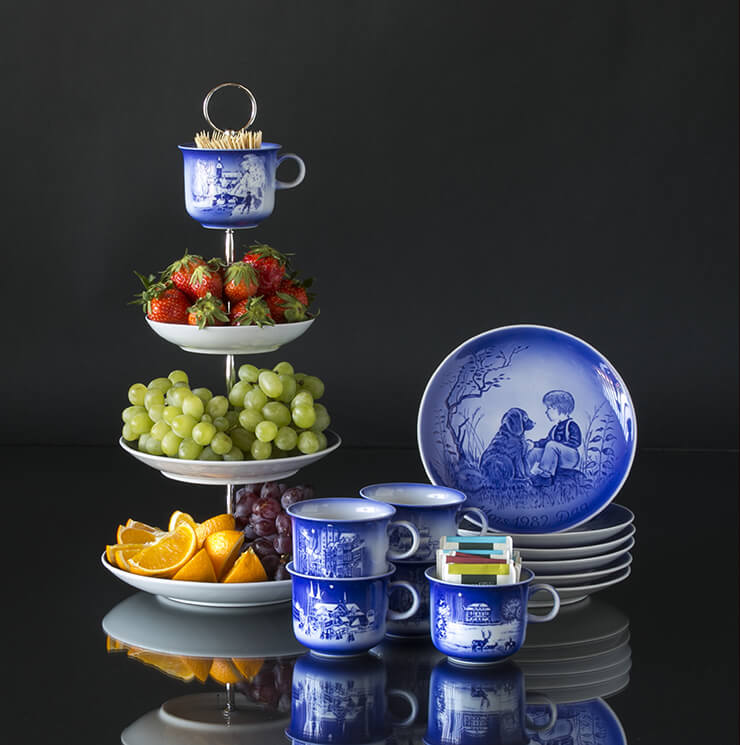 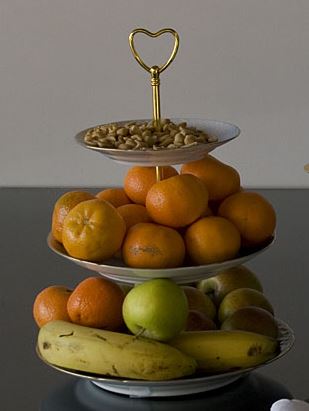 Maybe your great-grandparents, grandparents or parents collected the decorative plates with detailed motifs of defining moments in Danish history. Maybe you are a collector, but do not really know what to do with them, because you might feel they belong in the past? But now it's time for the plates to reappear. This time not on the wall - but on the dinner table!

The plates from the walls are now becoming fashionable again, and several producers and designers have begun to transform the old plates into cake stands and centrepieces. The collection of Christmas plates, Mother's Day plates, anniversary plates, or other plates, are reconstructed quite simply into centrepieces or a so-called étagère - as it is so elegantly expressed in French. 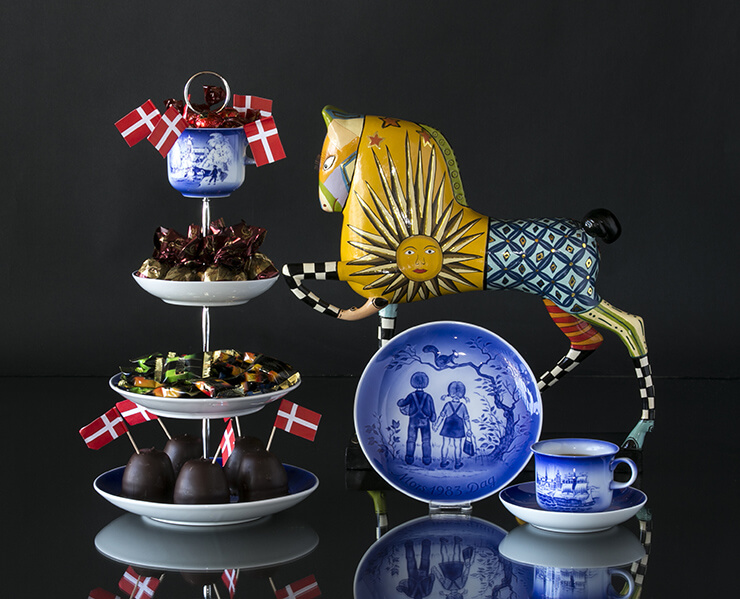 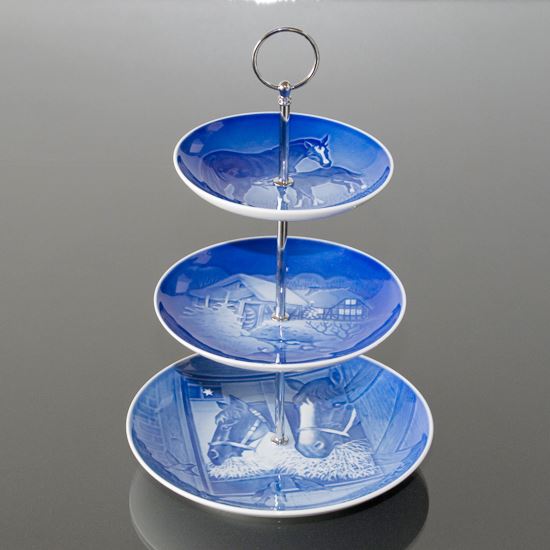 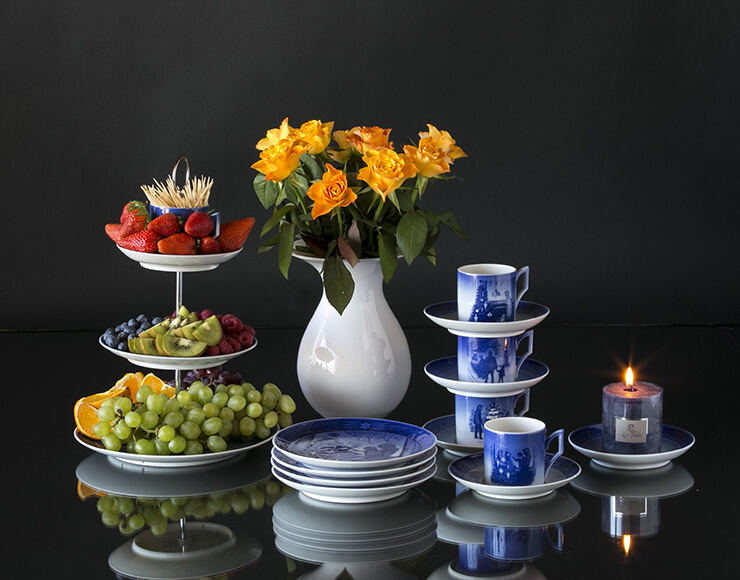 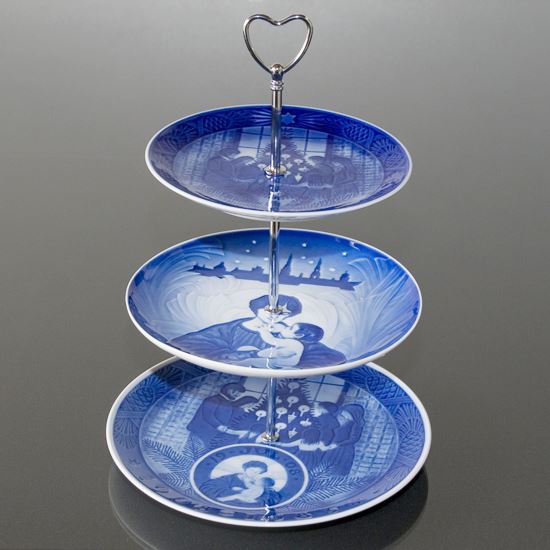 The transformation is performed by drilling a hole in the center of the plaques / plates. The supporting fixture in either gold or silver finish is then mounted to allocate 2-3 plates evenly and accurately over each other. The beautiful centrepieces can now be used to present all sorts of delicious dishes and exquisite aperitifs in an easy and elegant way - while releasing that extra space on the dinner or coffee table. 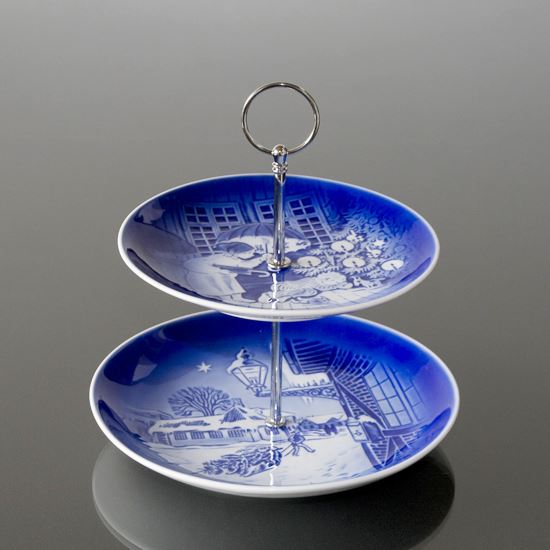 As something special it has especially been popular to mix and match plates with different designs and patterns of your choice when setting the table for festive occasions. The same principle can now be applied to the centrepieces. 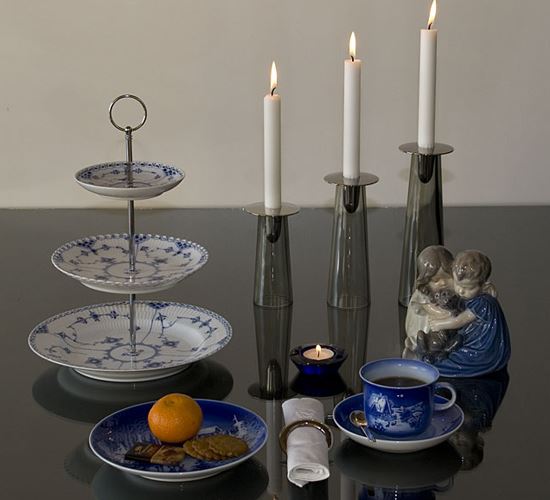 I.e. if you have set the table with white and blue plates from Royal Copenhagen Blue Fluted, Blue Flower, White Plain, etc., a unique centerpiece can now be made cheaply and simply. Here in the shop, you can choose the 2-3 plates you want and then a suitable stand get the holes drilled and receive the entire set within a few days. You can also bring your own plates and have them drilled at the DPH Trading shop in Odense.

Would you like a centerpiece for your old dinnerware, here is an example of how it might look. Here we have used Blue Flower braided dining-table plates of 24 cm, a lunch plate 21 cm, a cake-dish 15 cm, and a cake stand rack of your choice.

DPH Trading in Odense got the idea to drill holes in plates, when it was discovered that the method of drilling holes in vases and jars when making them into lamps could also be used on plates / dishes. The machine was equipped with a thinner drill and could thus make a precise and straight hole through a plate without making the slightest chipping.

That gave us the idea of offering the many plate-owners who had no idea what to do with their plates the opportunity of creating a unique centerpiece or étagère matching their plate collection or dinnerware.

Since then, several porcelain and china producers introduced different types of centrepieces. And, as the desire for flexible and modern table setting increases, the extravagant étagère fits perfect both for everyday use and special occasions.

The centerpiece allows a beautiful display of food which are also easy to carry. The centerpiece / étagère is no bigger than the lower, main plate and serving looks magnificent and appetizing at the same time.

As there are hundreds of different plates and dishes, and thus combinations, you can create your own unique centerpiece / étagère. For example, choose plates with the same motif in different sizes, or with different motif, but from the same vintage or series. 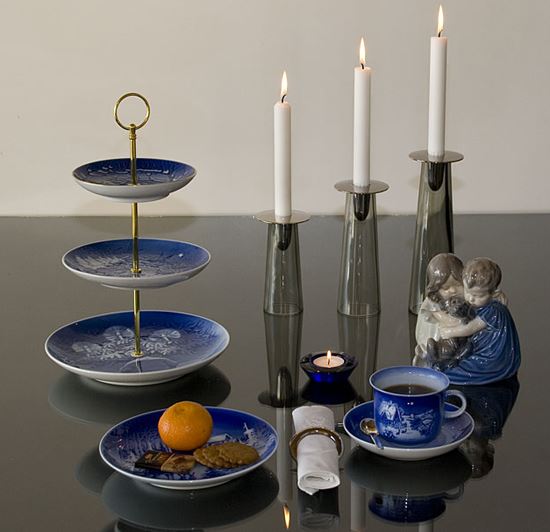 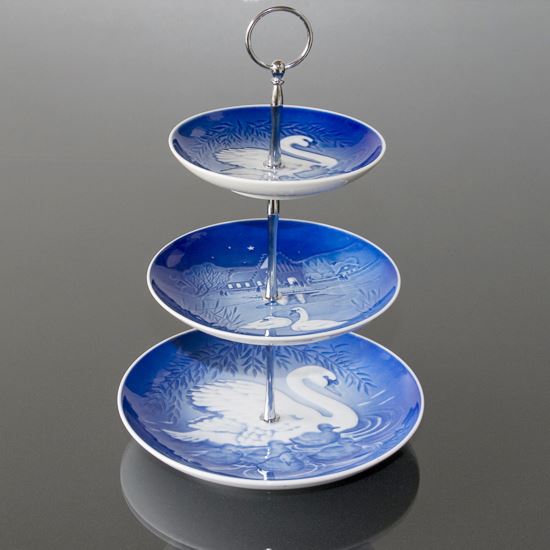 Alternatively, you can choose the slightly more daring approach and mix both colors, patterns and dinnerset of your choice.
Here is an example where we have chosen to use some beautiful old Bing & Grondahl Jubilee plates, as we think fit in size and motif - See all our B & G Anniversary plates. 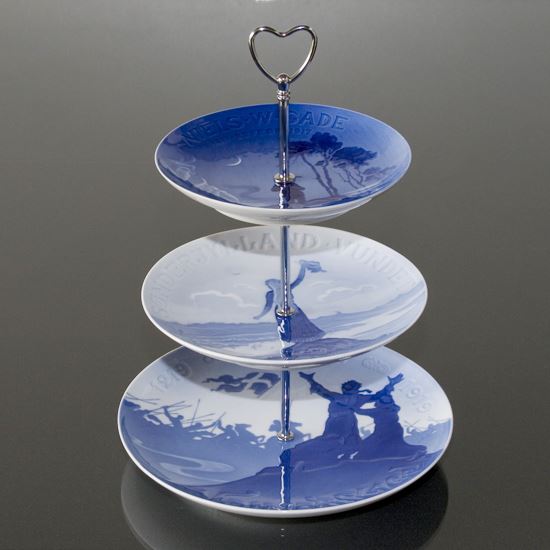 Whether you order your 2-3 plates here in the webshop or if it is your own plates, the price of the safe and professional drilling is DKK 99 incl. VAT. Fittings for the centerpiece is DKK 89 incl. VAT. This means that the total cost (without plates) will be DKK 188 incl. VAT.

In the webshop you will find a huge selection of vintage plates and branded dinnerware from Royal Copenhagen, Bing & Grondahl, Rosendahl, Erik Bagger and others, so there is plenty of opportunities to find the perfect combination for your unique centerpiece.

You can freely select the plates or dishes you would wish to be a part of the centerpiece, add a rack and a drilling to the webshop basket. Then we perform the drilling for you and send it all within a few days.

If you already have the plates that you want to make a centerpiece out of, put only a drilling and a rack in the shopping cart. Send the plates / dishes to us - we perform the drilling and the entire set is sent back to you - easily, quickly and elegantly. Find the address for DPH Trading here

Below please find the beautiful B & G Seagull centerpiece, consisting of a 24 cm flat plate at the bottom, a lunch plate of 21 cm in the middle and at the top is a cake plate of 15 cm - As the Seagull-dinnerset has a gold edge, it was obvious to use the fitting in gold finish. 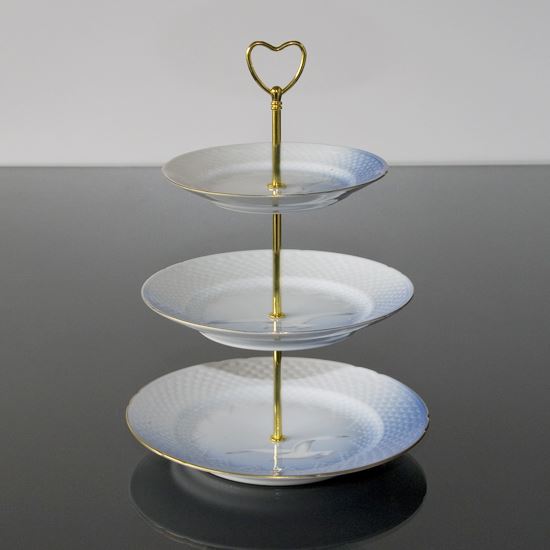 Here we have chosen only to make a centerpiece in 2 layers that use a B & G commemorative plate from King Frederik 9th's death in 1972 (25 cm), and a Royal Copenhagen Queen-plate, with the silhouette image of Queen Margrethe and Queen Ingrid. 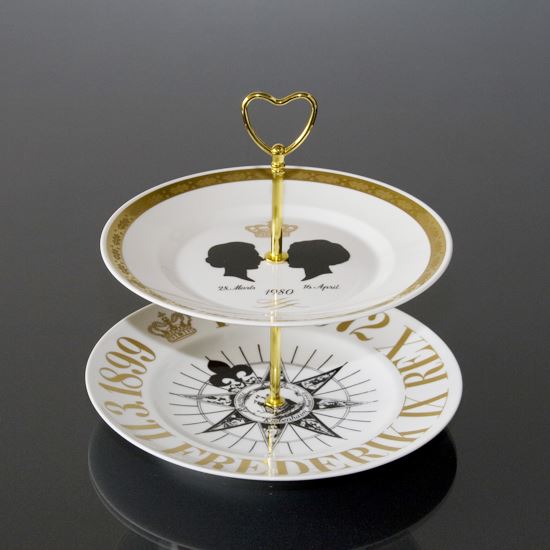 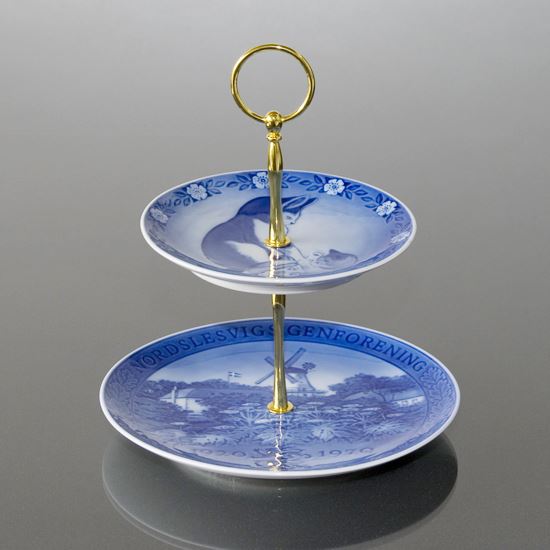 Lone Risager Therkelsen with different kind of centerpieces, all made of old decorative porcelain plates 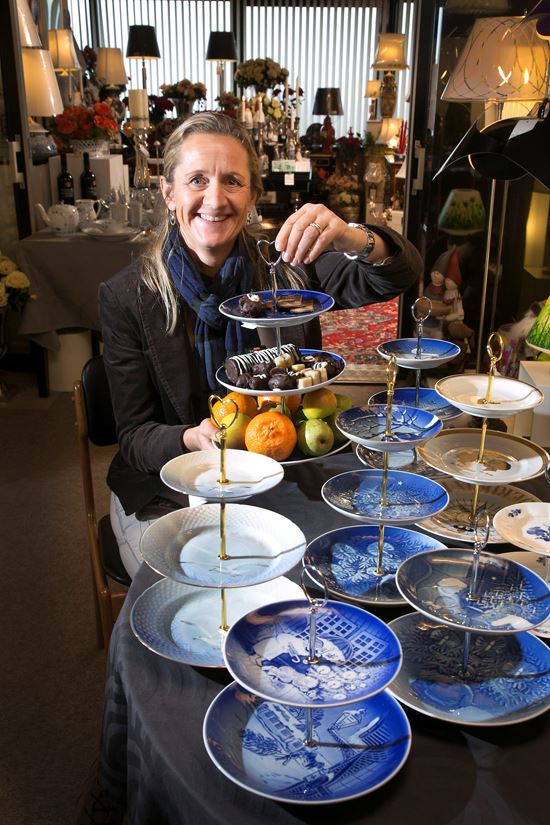 Only your imagination sets the limits for how your new centerpiece could look... 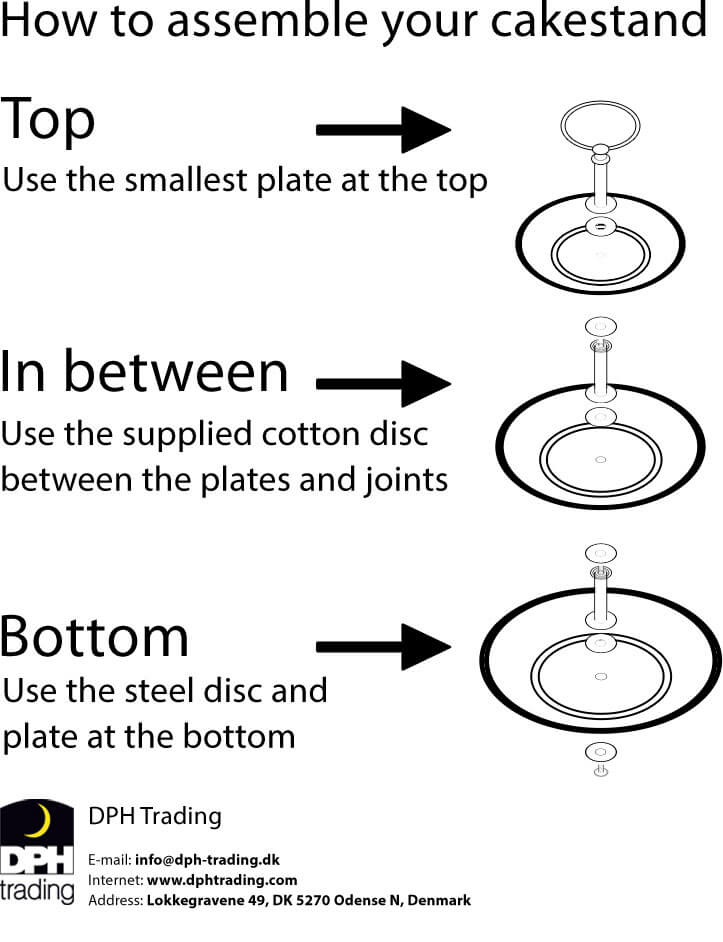